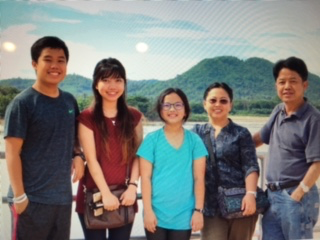 Organization you are connected with: Evangelical Free Church of America (EFCA)

Background: I was called to serve God and went to study the Bible in the Bangkok Bible Seminary in Bangkok, Thailand from 1992 to 1996. I met Nuanjan in Thailand and married her in April 1995. After I graduated from Bangkok Bible Seminary, Nuanjan and I came back to Minnesota to continue my Bible study in a Missiology program at Crown College and I graduated in 2000.

During my four years at the Bible College in Thailand, I had ministered to the Hmong people in Southeast Asia for Christ. During those 10 years that Nuanjan and I were in the United States, I also kept going back to Southeast Asia for leadership training to the church leaders two or three times per year. Nuanjan and I had prayed that in there would be a way or organization that God could send us to Southeast Asia. Then finally the Lord brought us to partner with EFCA and to minister through the EFCA organization for ten years.

We have three children, two girls and one boy (Meiyu, Johnie and Mercy). Meiyu is in her second year of college at Moody Bible Institute majoring in TESOL (Teaching English to speakers of other languages), Johnie will be graduating from High School this June, and Mercy is currently in the fourth grade.

Ministry highlights from 2016: In 2016, Nuanjan and I focused more in evangelism and church planting with our national partners at our neighboring country. Our (national partners and I) 2016 plans were to lead 300 people to the Lord, train 300 leaders and plant three churches. By the end of 2016, four churches were planted, 56 people were trained through the TEE program 27 times, 420 people have come to the Lord and 167 people were baptized.

Comments: Thank you for your (the Log Church) prayer and financial support for the ministry we are serving.